We investigate the role of neuroserpin, a serine protease inhibitor of the nervous system, in physiology and pathological conditions of the brain.

Dendrite from a pyramidal cell in the hippocampal CA1 region

Role of neuroserpin in brain development

Neuroserpin is a member of the serpin family of serine protease inhibitors and regulates the proteolytic activity of tissue-type plasminogen activator (tPA). Neuroserpin is principally found in the nervous system, its expression is restricted to neurons and enhanced in response to neuronal activity. Using neuroserpin-deficient mice, we showed that neuroserpin regulates developmental neurogenesis. In the hippocampus, we observed a premature switch from proliferation of neuronal precursor cells to differentiation into mature neurons in neuroserpin-knockout mice. Moreover, we demonstrated a regulatory role for neuroserpin in synaptic maturation. At the end of the “critical period” of synaptic reorganization, analysis of dendritic spines in the CA1 region of the hippocampus of neuroserpin-deficient mice demonstrated an altered morphology towards a more mature phenotype. At the same age, we detected increased protein levels of aggrecan, a component of the extracellular matrix whose expression reaches highest level in the brain after completion of neuronal maturation. These findings suggest that lack of neuroserpin leads to a premature formation and maturation of neuronal connectivity. In the adult mouse brain, we showed a regulatory function for neuroserpin in synaptic plasticity. Absence of neuroserpin leads to a decrease in synaptic density in the hippocampal CA1 region and to a reduction in long-term potentiation. Consistent with this phenotype, neuroserpin-knockout mice exhibit alterations in cognitive, emotional and social behaviour. 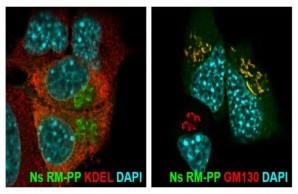 Molecular mechanisms of neuroserpin function are only partially understood. In vitro experiments showed complex formation and inhibition of proteolytic activity of tPA (tissue plasminogen activator), a serine protease colocalizing with neuroserpin and implicated in different physiological aspects, such as brain development and synaptic plasticity. tPA activity is reduced in the brain of mice overexpressing neuroserpin. Moreover, administration of neuroserpin blocks tPA-dependent visual cortex plasticity in adult mice and protects neurons against injury after ischemic stroke and seizures. However, zymographic analysis of neuroserpin-deficient brains showed unaltered tPA activity. Additionally, the neuroprotective role of neuroserpin in ischemia-induced injury and its function in regulating cell adhesion are partially independent from tPA activity. 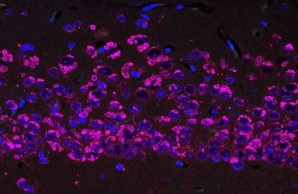 Accumulation of inclusion bodies in the hippocampus

FENIB is a neurodegenerative disease caused by point mutations in the neuroserpin gene. The mutations are responsible for a conformational change in the protein that favours the formation of neuroserpin polymers accumulating in the brain and promoting neuronal loss. Using transgenic mice overexpressing the mutant neuroserpin protein and a cell culture model of the disease we have investigated pathomechanisms of FENIB. We found that mutant neuroserpin accumulates progressively within neuronal inclusion bodies, and we confirmed that the amount of inclusions correlates with the conformational instability provoked by the mutation. We observed a transient activation of the unfolded protein response and ER-associated degradation of the mutant protein at early stages of the disease. Although most of the mutant protein is retained within the endoplasmic reticulum, a small fraction is secreted but is not toxic on cultured neurons.

Neuroprotective role of neuroserpin in stroke

Administration of recombinant neuroserpin as well as its transgenic overexpression reduces infarct size and blood-brain barrier leakage and increases neuronal survival in an animal model of ischemic stroke. We investigated stroke outcome in neuroserpin-deficient mice and found increase in infarct volume and excessive activation of proinflammatory microglia caused by the enhanced activity of neuroserpin target protease, tPA.

Link to publications of the Institute

Link to Team of the Institute