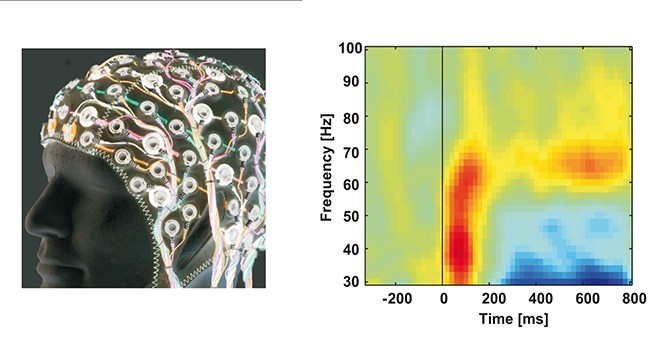 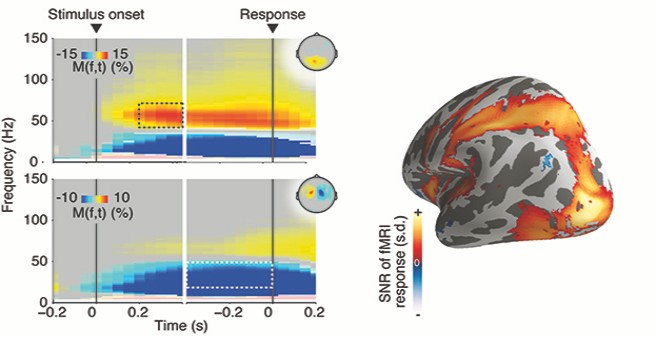 Research program of the department

The key theme of research at the Dept. of Neurophysiology and Pathophysiology is the large-scale dynamics of cortical and subcortical networks, which we address in humans and in animal models by combining electrophysiological and neuroimaging methods. Our specific focus lies on the study of functional and effective connectivity in brain networks. We try to demonstrate and understand the possible functional role of dynamic large-scale coupling for perception, cognition and action. To this end, we also aim at testing hypotheses on causal mechanisms by modulation of networks and connectivity. Furthermore, we have a strong interest in the pathophysiological relevance of neural synchrony and changes of large-scale coupling in brain disorders.

Networks dynamics underlying sensorimotor and cognitive processes
Using EEG and MEG, we investigate the relation between functional connectivity and perceptual, sensorimotor, attentional and working memory processes. Furthermore, we investigate the relation between neural synchrony and changes in level and contents of consciousness. An important methodological focus is the improvement of data-driven methods for the analysis of functional coupling. A major focus of research, currently funded by the ERC Advanced Grant „Multisense – The merging of the senses: understanding multisensory experience“, addresses the mechanisms of multisensory interactions in the human brain. Furthermore, we have recently begun to extend our coupling analyses to two-brain interactions. In the EU-funded project „socSMCs – Socializing sensorimotor contingencies“ we study social interaction by applying connectivity measures to hyperscanning EEG and motion tracking data in joint action paradigms.

Pathological network changes
As a large number of neurological and psychiatric disorders involve malfunctions in brain networks, we have a strong interest in translational application of our network research. In cooperation with the UKE departments of neurosurgery and neurology, intraoperative microelectrode recordings are performed in the basal ganglia and thalamic nuclei. The recordings are carried out in patients with Parkinson’s disease, dystonia or essential tremor to improve the depth localization of the target sites for deep brain stimulation. Data collected during these measurements are used to test hypotheses on the pathophysiological role of neural synchronization phenomena and to study correlates of cognitive processing at the level of single cells or small populations in the human brain. In addition to the work on movement disorders, we investigate alterations of network dynamics in patients with multiple sclerosis. In cooperation with the UKE department of psychiatry, we analyse alterations of connectivity in patients with schizophrenia as well as in patients with high-functioning autism.

Network modulation
In order to corroborate the functional relevance of oscillatory signals and dynamic connectivity, interventions are required that allow to manipulate these phenomena in a specific manner and to test the effects on task- or stimulus-related processing. In humans, transcranial alternating current stimulation (tACS) seems particularly promising because it opens up the possibility of entraining ongoing activity in a frequency-specific way. In several recent studies, we have combined tACS with EEG to monitor neural entrainment during the stimulation. A particular focus is on modulation of long-range connectivity by tACS which we have recently successfully demonstrated.

Network studies in animal models
Experiments in both anesthetized and behaving animals (ferret, rat, mouse) are carried out to test the functional relevance of neural synchronization for sensory processing in the visual, tactile and auditory modality, as well as for cross-modal interactions. Complementing the intraoperative recordings in patients, neural dynamics is studied in cortex and basal ganglia in mouse lines with mutations related to Parkinson‘s disease. Studies in awake ferrets involve multi-site recordings with chronically implanted electrodes to allow the direct monitoring of neural interactions during spontaneous behaviours and during task performance.

Technical applications
As part of several EU-funded projects, we have contributed to implementing robot systems that combine visual, tactile and auditory information processing to achieve orienting behavior, object recognition, navigation, and memory formation. In the context of the EU-funded project „eSMCs – Extending sensorimotor contingencies to cognition“, we have continued this research to study how cognitive processing can potentially be grounded in sensorimotor interactions. Currently, we apply neurophysiological insights to improve human-robot interaction in the EU project „socSMCs“. Moreover, we address the issue of neural dynamics in the context of non-invasive brain-computer-interfaces.

This research group was established in 2015, within the context of a DFG Heisenberg Professorship awarded to Tobias Donner and became the Section "Computational Cognitive Neuroscience" in 2019. The section studies the neural dynamics underlying decisions in the human brain. Human decision-making is highly flexible and context-dependent. Even simple sensorimotor decisions result from a complex interplay between large numbers of neurons distributed across many different areas of the cerebral cortex. The flexibility of decision-making evident at the behavioral level suggests that the underlying cortical circuit dynamics can be remodelled “on the fly”, depending on the behavioral context. The modulatory neurotransmitter systems of the brainstem might play a key role in this flexible remodelling. To test this hypothesis, the section uses an integrative approach that combines psychophysical measurements and computational modeling of choice behavior, multimodal neuroimaging (fMRI, MEG), and pharmacological intervention.

The group was established in early 2019 as part of a European Research Council (ERC) Starting Grant awarded to Dr Konstantinos Tsetsos.

During complex decisions people do not process all available information at once but instead they attend sequentially to different aspects of the available alternatives. However, the regularities that govern this sequential process remain poorly understood. The primary research direction of this group is to fill this gap by harnessing tools from sensory neuroscience in order to unravel the computational and neural mechanisms that guide attention towards different aspects of multiattribute alternatives. This project aspires to yield a neurophysiologically detailed theory of multiattribute choice that will shed light on century-long questions, such as why humans reverse their preferences irrationally, when irrelevant alternatives are added to the choice-set.