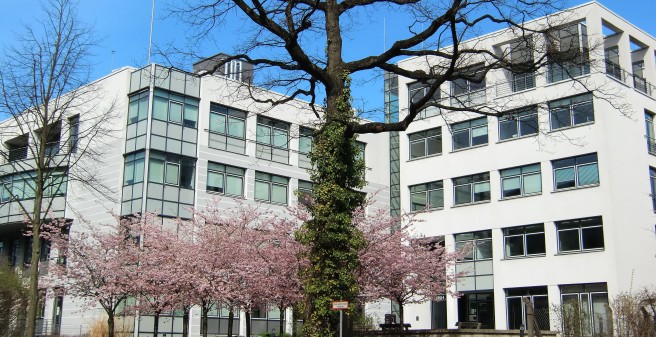 Founding Director of the Center for Molecular Neurobiology Hamburg (ZMNH)

Due to my retirement in 2005 the Institute for Cell Biochemistry and Clinical Neurobiology at the University Medical Center Hamburg-Eppendorf (UKE) was closed down. The help of the directorate of the Center for Molecular Neurobiology Hamburg (ZMNH) by providing space for the continuation of my scientific activities is greatly acknowledged. Most of the ongoing research was carried out in collaboration with my former co-workers Stefan Kindler and Hans-Jürgen Kreienkamp, now group leaders at the Institute for Human Genetics, UKE. Research has been focused on how nerve cells manage to respond to external and internal signals in order to maintain and regulate their cellular architecture. As shown earlier signal transduction processes involving neurotransmitter receptors are mediated by a series of defined protein-protein interactions. We have identified specific interacting proteins for the C-terminal, intracellular regions of each subtype of G-protein coupled somatostatin receptors (SSTR1-5). Some interacting partners, such as the PDZ domain protein PIST, have a function in membrane targeting of SSTR3 and SSTR5. Others such as the tight junction protein MUPP1 or the postsynaptic scaffold proteins PSD-95 (interacting with SSTR4) or SSTRIP/shank (interacting with SSTR2) link the receptors to large signaling complexes, such as the postsynaptic density (PSD) in excitatory synapses of the central nervous system.

We have also continued our work on the structure and function of the members of the shank protein family which represents master scaffold proteins of the PSD and appears to play a central role in neuronal morphogenesis and synaptogenesis. We have shown that shank proteins interact directly or indirectly with neurotransmitter receptors, actin binding proteins and other prominent postsynaptic scaffold proteins such as PSD-95. More recently, we have studied the pathogenesis of the fragile X-mental retardation syndrome (FXS). To date, the molecular events leading from the loss of the fragile X mental retardation protein (FMRP) to the diverse devastating symptoms of FXS, including cognitive impairment and autism, are still poorly understood. Much research on the cellular causes for FXS has been focused on synaptic dysfunction. In brain neurons of wild-type mice, FMRP is found in the proximity of synapses where it primarily represses translation of mRNAs at postsynaptic sites. This translational block can be abolished via stimulation of metabotropic glutamate receptors (mGluRs). Thus, lack of FMRP leads to excessive mGluR-dependent protein synthesis at synapses which may be the major cause for synaptic malformation and dysfunction. Indeed, in FMRP deficient mice several FXS symptoms can be corrected by a reduction of neuronal mGluR levels. While mGluRs act upstream of FMRP in the signal cascade regulating local synaptic protein synthesis, the downstream components involved in FXS pathogenesis are less well described. Recently, we reported that the PSD is altered in FMRP deficient mice. We could show that several mRNAs encoding components of the PSD are in vivo associated with FMRP. Via this interaction FMRP controls dendritic mRNA translation and postsynaptic protein levels, but not local transcript stability. In particular, FMRP was shown to repress the translation of shank 1-mRNA in an mGluR-sensitive manner by binding to the 3’ untranslated region (3’UTR). Thus, our data suggest that the mGluR/FMRP pathway controls shank 1 levels in the PSD. In agreement with this idea is the finding by Durand et al., 2007, that mutations in the gene encoding shank 3 are associated with autism spectrum disorders and mental retardation. Based on our hypothesis that elevated shank 1 levels in PSDs represent key molecular events of the FXS pathology we presently try to reduce synaptic shank 1 levels in FMRP deficient mice (Fmr1-/-) by genetic manipulation followed by analyzing various structural, molecular and behavioral parameters of the mutant mice. We expect that similar to a reduced concentration of mGluR5 (Dölen et al., 2007), an upstream component of the FMRP-dependent synaptic protein synthesis pathway, the genetically induced reduction of postsynaptic levels of shank 1, a downstream signaling molecule, will correct at least some of the pathogenic alterations observed in Fmr1-/- mice. Thus, shank 1 may emerge as an attractive novel drug target for the treatment of FXS patients.

We also extended our previous work on allatostatin receptors in invertebrates, a G-protein coupled receptor (GPCR) family initially identified by a reverse pharmacological approach in Drosophila melanogaster (Birgül et al., 1999). Recently, we described allatostatin receptors from Periplaneta americana and Aedes aegypti, all are structurally related to vertebrate galanin/somatostatin/opioid receptors. Expression studies revealed that allatostatin receptors are widely expressed in adult insect tissues and in early larval instars. The spatial expression supports the known pleiotropic activity of allatostatins and a role as a paracrine effector. Support The projects are supported by the Deutsche Forschungsgemeinschaft, Thyssen and Ritz Stiftung.