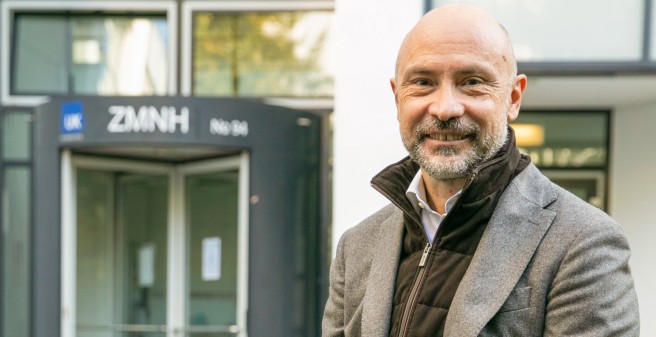 In pursuit of the code

Prof. Dr. Stefano Panzeri has worked at universities in Italy, Great Britain and the USA. The mathematical neuroscientist seeks to further advance brain research at the medical faculty of Hamburg University, which has the University of Excellence status.

Our brain neurons are always engaged in conversation. "For us to feel, think and act, the neurons emit small electric impulses so that information can be relayed in a targeted manner from one brain region to another," Prof. Dr. Stefano Panzeri explains. But in which language do they communicate with each other? The mathematical neuroscientist has been researching at the UKE's Centre for Molecular Neurobiology in Hamburg since the summer of 2021 and is seeking to crack this code with computer calculation models. "If we succeed in improving our understanding of brain neurons, we could help persons with acquired brain injury in novel ways."

Numbers have always fascinated Professor Panzeri. "But I would never have dreamt that I would become a scientist." The 53-year-old Italian, who comes from a working-class family based near Genoa, discovered his love for science during his youthful forays into nature. "I liked collecting fossils and spent afternoons observing plants and animals," he recounts. After graduating from secondary school, he studied mathematical physics and initially immersed himself in issues relating to space. He obtained his PhD in neurosciences. "For me, this was the perfect combination of mathematics and nature. Furthermore, I was fascinated by viewing the brain as a machine, whose processes I wanted to understand." Professor Panzeri pursued this endeavour at international universities and institutes. Among other places he works at the universities in Oxford, Newcastle, Manchester and Glasgow in Great Britain. He is also a visiting researcher for biological cybernetics at the Max Planck Institute and at Harvard Medical School in the USA.

When Professor Panzeri received the offer for a nucleus professorship in Hamburg, he did not need long to make up his mind. "I have appreciated the scientific environment at the UKE for a long time and am convinced that the conditions for further research will be excellent here."

Together with the neuroscientists at the UKE, Professor Panzeri would like to further pursue research into the communication processes between brain areas and changes caused by disease. What is he particularly looking forward to? "Not so much to the weather," the Italian admits with a wink, "but to cooperating with clinical researchers. The UKE is one of the few hospitals in Europe where basic neuroscientific research and the clinical field are so tightly interlocked." He is currently working closely with UKE scientists in the Special Research Centre SFB 963 ("Multi-Site Communication in the Brain"). "For example, when we know how cells communicate with each other, we can try to design ways for information to arrive in the brain in cases involving the loss of certain senses."

In his leisure time, the neuroscientist lets his thoughts roam freely. Most preferably, while swimming or hiking in nature. He has also already discovered the beaches of the North Sea and the Baltic Sea. Now he wants to learn German. "Speaking is already working out quite well," he laughs.