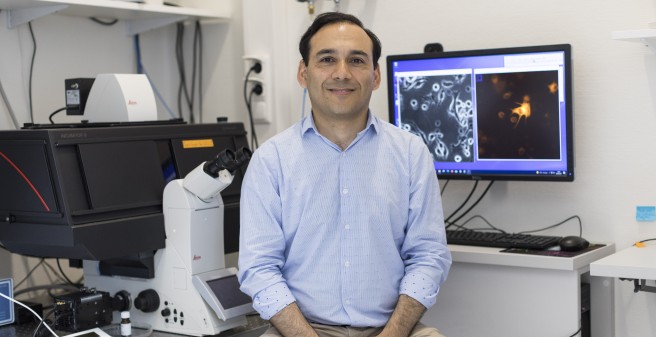 An experimental kit and big plans

From Santiago de Chile via Paris to Hamburg - Professor Dr Pablo J. Sáez came to the Institute of Biochemistry and Molecular Cell Biology in the summer of 2020. With his professorship he also received his own laboratory in the Fritz Schumacher-Haus, where he and his team research the migration of immune cells. The South American has also developed a culinary affection for Hamburg - he rarely misses out on Franzbrötchen, a typical Hamburg pastry.

At the age of five, Pablo Sáez had made up his mind: he wanted to become a pilot. However, his dream of flying already crashed in primary school. "I had an ear operation because of problems in equalising pressure. That forced me to suspend my hobby, surfing, for one year. I also had to give up my career aspirations," the 37-year-old says with a chuckle. However, curious as he is, he discovered his new passion, science, in a school experiment on the buoyancy on carrots. "I then got an experimental kit as a birthday present, but never used it. I wanted to keep it for the laboratory in which I would work some day," he recollects with a wink.

It did work out well with the experiments after all. At High School, his German-Chilean teacher Ana Edwards Karlström introduced him to microscopy. "When I looked at the first amoeba under a microscope and saw how cells moved, I was totally fascinated, and still am today."After graduating from High School, Pablo Sáez started to study biology at the Pontifical Catholic University of Chile, where he obtained his Master's and his PhD. In his doctoral thesis, Sáez focused on immune cells and researched how they move and communicate with each other. In 2013, he swapped his home country Chile for faraway Paris and took up a post at the Institut Curie.

The biologist and UKE first came into contact in 2017 during a conference in Pisa, Italy, where he met Professor Dr Dr Andreas Guse, Director of the Institute of Biochemistry and Molecular Cell Biology. "We started talking and briefly discussed my project. We mainly had a very nice chat about sport, so that in the end I was unsure whether he was even interested in my scientific work," the scientist recounts with a laugh. A year later, they met again, and Professor Guse tried to enthuse Pablo Sáez with a professorship at the Centre of Experimental Medicine. "Of course, I was delighted, but for the time being I rejected, because my wife and I finally felt at home after six years in Paris." Ultimately, his scientific curiosity gained the upper hand - as well as the inclination to take the next step in his personal scientific development. "What I love about my work is being able to freely develop my ideas in the laboratory and to create global networks for exchanging experiences that help us make joint progress," says an enthusiastic Professor Sáez. So far, his international team consists of four people; his interdisciplinary collaborations range from Germany and France to Spain, Portugal, Italy, the USA and Israel. At the UKE, the persons Sáez cooperates with closely include Professor Dr Jörg Heeren, Professor Nicola Gagliani, Dr Maike Frye and Dr Virgilio Failla, who introduced him to the local science community.

The new insights into cell migration and cell communication could also be put to future use in cancer medicine. "Our innate immune system is one of our body's first lines of defence - also in the fight against cancer. As soon as we get approval, we want to work on getting immune cells to recognise tumour cells and fight them like an infection." Another central research topic is personalised medicine, which takes into account the individual genetic conditions of patients in cancer therapy. "In order to target tumour cells more precisely, we analyse the properties of tumour tissue at the cellular level and their interaction with immune cells."

Outside of the laboratory, Pablo Sáez enjoys spending time with his family. "Especially the children are delighted about the great playgrounds in Hamburg and the many green spaces." And what about surfing in the Pacific? "I miss that, of course. But soon I am going to try out windsurfing in the Baltic Sea. I am already looking forward to it!"