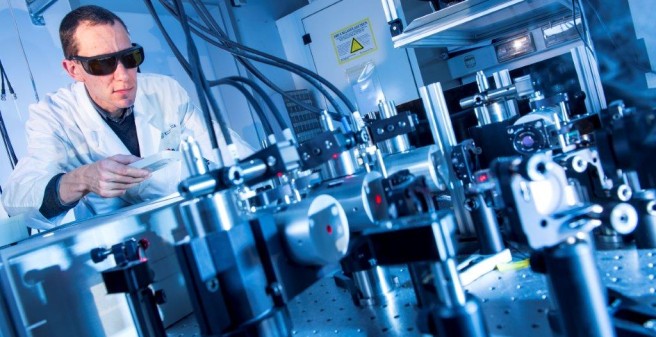 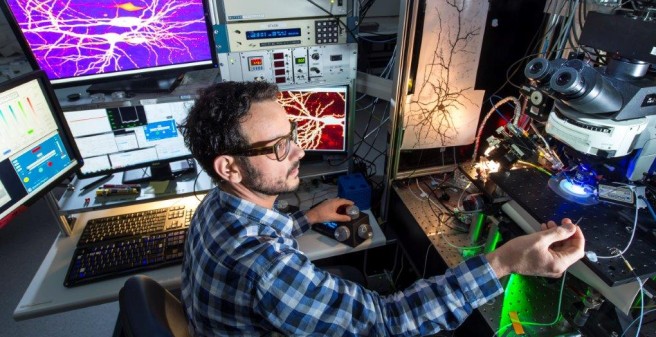 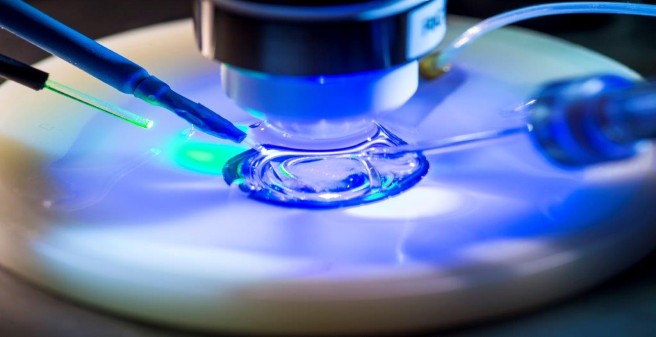 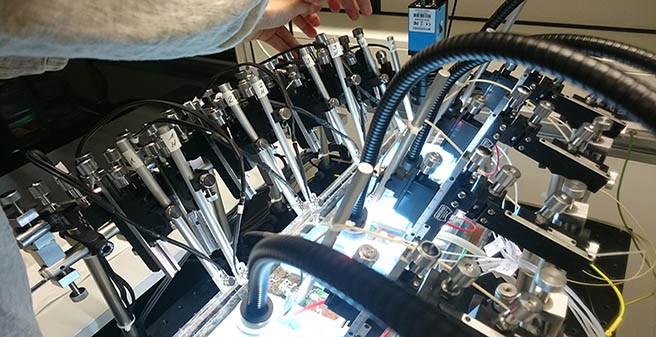 Neurons in the brain communicate through chemical synapses. Depending on the activity of pre- and postsynaptic cells, these communication channels can rapidly and persistently change their strength. These functional adaptations, collectively known as long-term plasticity, involve a large number of intracellular signaling systems. On longer timescales, new synapses are established between previously unconnected cells while other synaptic connections are completely removed. Together, these changes in the efficacy and connectivity of brain circuits are thought to be crucial for information processing and memory storage in the brain.

We develop optogenetic methods to stimulate identified neurons and to optically measure the amplitude of postsynaptic calcium transients in dendritic spines. Two-photon laser scanning microscopy allows us to perform such optophysiological experiments in intact brain tissue with high spatial and temporal resolution. Using genetically encoded probes, we monitor the activity of single synapses over several hundred stimulations and measure parameters such as synaptic potency and the probability of glutamate release. Optical induction of plasticity at individual, identified synapses allows us to investigate the underlying electrical and biochemical processes in great detail. The connectivity of our brain constantly changes in response to sensory experience (Huber et al., 2012). A central aim of our research is to understand the rules and molecular mechanisms that govern our extraordinary ability to learn and to remember.

Synaptic transmission is regulated in many ways, e.g. by modulatory neurotransmitters which are coupled to intracellular signaling systems via specific receptors. My research strives to reveal the roles that cyclic nucleotides, and specifically cGMP, play in this context. I am particularly interested in studying the synapses of the striatum – a brain area that is important for motor control and many other functions. Striatal synapses have many similarities to the more extensively studied hippocampal synapses, but also striking differences, and teasing those apart I find particularly interesting. I hope my research will contribute to a better understanding of the pathology of human diseases that affect the striatum, such as Parkinson’s disease, Huntington’s disease and L-DOPA-induced dyskinesia.

I would like to understand how networks of neurons and their synaptic connections store information. Towards reaching this goal, we have developed an all-optical method to induce spike-timing-dependent plasticity at a small subset of hippocampal CA3-CA1 connections so that we can follow the changes in synaptic strength over days (Anisimova et al., 2021). I also am very interested in modulation of synaptic strength by G-protein-coupled receptors and intracellular signaling cascades downstream of cAMP and cGMP. To bypass the receptors and study the intracellular cascades in particular cells, I have been involved in developing and characterizing new optogenetic tools such as the rhodopsin guanylyl and adenylyl cyclases (Scheib et al., 2015, Scheib et al., 2018), and a membrane-anchored no dark activity photoactivatable adenylyl cyclase called PACmn (Constantin et al., 2021). SynTagMA (Perez-Alvarez et al., 2020) and a light-activated potassium channel (Beck et al., 2018) are other tools that have become quite useful for studying and modulating network activity. Using some of these optogenetic tools has revealed a key role of unexpected inter-cellular communication pathways downstream of cAMP or neuronal spiking that we are working hard to understand. My work is currently funded by the Landesforschungsförderung Hamburg and the DFG (FOR 2419 and SFB 1328).

Cyclic AMP is one of the most important intracellular signaling molecules, its increase and decrease governs a large repertoire of cellular functions. It is an ancient molecule that can be found in organisms from all kingdoms of life, from bacteria to plants and animals. We develop tools to modulate the intracellular concentration of cAMP with high spatial and temporal resolution, which is not possible with traditional pharmacological approaches. Improved light-activated adenylyl cyclases (CaRhAC, PACmn) can be selectively expressed in the cells of interest and activated with light to tightly control intracellular cAMP levels. In the brain, cyclic AMP is thought to be involved in learning: When changes occur in the environment, the connections between specific neurons strengthen, a process known as long-term plasticity or LTP. Cyclic AMP signaling pathways are active during the consolidation of LTP, a process that is dependent on protein synthesis and structural changes at synapses. I am using the newly developed optogenetic tools to unravel the function of cAMP signaling in the hippocampus during long term plasticity.

Representations of time and space in the hippocampal circuit

Neuronal activity patterns occur in a subset of neurons during encoding of memories. These ensembles are then reactivated when animals revisit the space in which the memory was encoded or when a particular (conditioned) stimulus, associated with that experience, is presented to the animals. We are interested in understanding how these patterns emerge from the vast number of neurons inside a mouse brain. Why these cells and not others? Is there a molecular or physiological signature that pre-selects them? In particular, we focus on the dentate gyrus (DG) of the hippocampus, which is a structure with extremely high neuronal density but with only a few neurons (<10%) active at a given time. The DG is fundamental for episodic memories and serves as a discriminator of similar experiences. We use mouse lines that have been genetically engineered to identify (tag) and exclusively express tools that allow their manipulation in neuronal ensembles. These tools are expressed only in active ensembles and in a chosen temporal window of experience. We challenge the mice to learn a particular escape location in a water tank (Morris water maze). Mice take several days to master this task, and we can monitor how learning affects the dynamics of active ensembles. Combining the selective tagging with opto- and chemogenetic tools, we can interrogate how the spatial information needed to solve the task is integrated over time in these neuronal ensembles.

The formation and elimination of dendritic spines play an important role in structural remodeling of neuronal networks. This process is highly dynamic and occurs over different timescales. To get a better understanding of the dynamics of spine formation and interaction between nearby spines, we image excitatory and inhibitory synapses over extended time periods up to several days using organotypic brain slice cultures as a model. We are particularly interested in the removal of spines and the appearance of novel spines: Do these events have any repercussions in the local dendritic neighborhood?

Changes in synaptic ultrastructure after LTP

Synaptic plasticity events, dynamic changes in the efficacy of synapses, represent a major mechanism of information storage in the brain. Importantly, synaptic plasticity is not only electrochemical but also structural and mechanical in nature, an aspect that is often called ‘structural’ plasticity to distinguish it from functional read-out. In my project, I’m particularly interested in studying the ultrastructural plasticity to reveal the material basis of information storage at synapses. I generate the information by manipulating the synapse-of-interest optogenetically, followed by electron microscope (EM) imaging of the manipulated synapses. For this purpose, I use peroxidase-based genetic tags (HRP, APEX2, etc.) and correlative light electron microscopy (CLEM) to identify the synapses of interest. Combined with sparse transfection and non-invasive stimulation strategies, we investigate long-term (up to 3 days) synaptic changes. My aim is to establish a readout of synaptic plasticity at the ultrastructural level.

Two-photon microscopy is the major analytical technique used in our lab and easily produces large amounts of data. I am working on establishing image processing workflows using both commercial software and custom code (Matlab, python) so that quantitative information can be extracted from the acquired images in a reproducible way (Laprell et al., 2021). I am also involved in modifying instrument software to add not-so-common features to the repertoire of experimental tools (Perez-Alvarez et al., 2020). To interpret experimental results, it is often useful to test your intuition with a biophysically realistic model. I contributed to the analysis of vesicular glutamate release at synapses by simulating the signaling event, using the Monte-Carlo simulation environment MCell (Dürst et al., 2020).

We collaborate with Anne Schäfer (NYC), Antoine Triller ) and Nils Brose to investigate the communication between microglia and neurons.