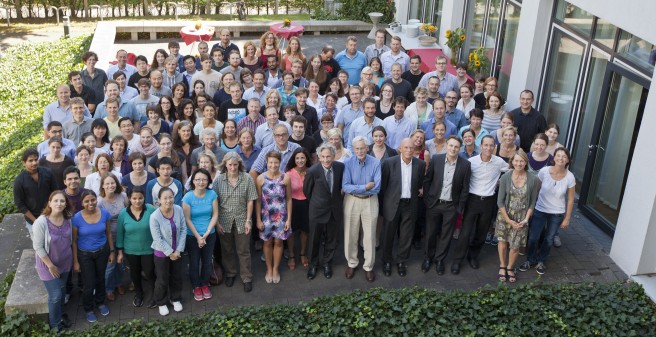 The ZMNH celebrated its 25th anniversary in September 2013.

The Center for Molecular Neurobiology Hamburg (ZMNH) was established at the Faculty of Medicine of Universität Hamburg in 1987. It was the first research institute focusing on Molecular Neurobiology in Germany. Dietmar Richter was appointed founding director and led the ZMNH until the opening of the new ZMNH building in 1996.

The ZMNH set standards already in its founding phase from 1987 to 1996. Research funding was acquired from the German Ministry of Research and Technology (BMFT) and the German Research Foundation (DFG) in the amount of 60 million DM. Outstanding research findings were recognised with prizes, e.g. the Leibniz Prize for Thomas Jentsch in 1995.

A new generation of ZMNH junior research group leaders started in 1994: Dietmar Kuhl, Michael Wegner und Roger Nitsch. They all came from the US emphasing the importance of the strategy to integrate young successful researchers from abroad to the German research landscape.

The set-up phase of the ZMNH and with it the term of the Founding Director ended with the move to the new ZMNH building on Falkenried 94 in 1996. In his speech on the occasion of the official opening Dietmar Richter stated: “The funding from the City of Hamburg and the federal funding were fundamental conditions contributing to the research dynamics of an institution such as the ZMNH. Creativity, ideas and initiatives of single researchers are essential to further develop the ZMNH in the extension phase.”

That this was a success shows the fact that the ZMNH comprises in 2015 five institutes, eight research groups, two guest groups and seven core facilities.

The appointment of ZMNH scientists to internationally renowned institutions of neuroscience research demonstrates the high standard of scientific work at the ZMNH such as the numerous publications in high-ranking peer-reviewed journals.

In 2001, the ZMNH joined the UKE according to the law “Gesetz zur Errichtung der Körperschaft Universitätsklinikum Hamburg-Eppendorf (UKEG)” of September 12th, 2001. The University Medical Center Hamburg-Eppendorf (UKE) with its research focus neuroscience and the Hamburg Center of NeuroScience (HCNS) established in 2009 offers excellent opportunities for collaborations in the field of neuroscience.

Interview with Prof. Richter and Prof. Kuhl on the 25th anniversary of the ZMNH in the UKE news (in German)

Michael Frotscher (2011-2017) Director of the Institute for Structural Neurobiology at the ZMNH died on May 27, 2017. We will treasure our memories of Michael Frotscher, an outstanding scientist and wonderful friend whose heart beat for science.

Olaf Pongs (1991-2011) Director of the Institute for Neural Signal Transduction at the ZMNH until his retirement in September 2011, is now at the Institute for Physiology of the Faculty of Medicine, Saarland University.

Chica Schaller (1991-2005) Director of the Institute for Developmental Neurobiology at the ZMNH until her retirement in May 2005. is now dedicated to the Chica and Heinz Schaller Foundation (CHS) in Heidelberg.

Edgar Kramer (2008-2016) Head of the ZMNH group Development und Maintenance of the Nervous System, is now Head of a research group at the Institute of Applied Physiology of Ulm University.

Thorsten Hoppe (2003-2008) Head of the ZMNH group Neuronal Protein Degradation, is now Head of the research group Proteostasis in Development and Aging at the Institute for Genetics of the University Cologne and the CECAD Cologne Institut für Genetik der Universität Köln und Principal Investigator am Exzellenzcluster CECAD Köln.

Matthias Kneussel (2002-2010) Head of the ZMNH group Protein Trafficking and Synapse Formation, is now Director of the ZMNH Institute for Molecular Neurogenetics .

Thomas Schimmang (2000-2005) Head of the ZMNH group Induction and Differentiation of the Inner Ear, is now head of the research group Inner Ear Development at the Institute for Biology and Molecular Genetics in Valladolid, Spain.

Dieter Riethmacher (1999-2008) Head of the ZMNH group Development of the Peripheral Nervous System, is now Visiting Professor in Human Genetics at the University of Southampton, Hampshire, UK and since 2015 Departmental Chair at the Nazarbayev University School of Medicine, Astana, Kazakhstan.

Dietmar Kuhl (1994-2002) Head of the ZMNH group Synaptic Plasticity: Learning about Activity-dependent Genes until 2002, was at the Department of Biology - Chemistry - Pharmacy at the Freie Universität Berlin from 2002 to 2008 and is now Director of the ZMNH Institute for Molecular and Cellular Cognition .

Roger M. Nitsch (1994-2000) Head of the ZMNH group Neurodegeneration and Alzheimer's Disease, is now Director of the Division of Psychiatric Research at the University of Zurich.

Michael Wegner (1994-2000) Head of the ZMNH group Regulation of Neural Gene Expression in Development and Disease, is now Head of the Lehrstuhls für Biochemie und Pathobiochemie at the Universität Erlangen.

Craig C. Garner (1988-1993) Head of the ZMNH group Factors Determining the Spatial and Temporal Expression of Neuronal Microtubule-associated Proteins, was Professor at the Department of Psychiatry and Behavioral Sciences of the Stanford University until 2014 and is now Professor at the German Center for Neurodegenerative Diseases (DZNE) and the Charite-Universitätsmedizin Berlin.

Cornelis Grimmelikhuijzen (1988-1993) Head of the ZMNH group Novel Neuropeptides from Coelenterates and Mammals, is now Chairman of the Department of Cell Biology at the Zoological Institute at the University of Copenhagen.